The Ventricular System of the Brain

Labeled sagittal noncontrast CT scan of the head showing the ventricular system which is filled with intraventricular hemorrhage.

The ventricles are filled with cerebrospinal fluid (CSF) which bathes and cushions the brain and spinal cord within their bony confines. CSF is produced by modified ependymal cells of the choroid plexus found in all components of the ventricular system except for the cerebral aqueduct and the posterior and anterior horns of the lateral ventricles. CSF flows from the lateral ventricles via the foramina of Monro into the third ventricle, and then the fourth ventricle via the cerebral aqueduct in the brainstem. From there it can pass into the central canal of the spinal cord or into the cisterns of the subarachnoid space via three small foramina: the central foramen of Magendie and the two lateral foramina of Luschka. 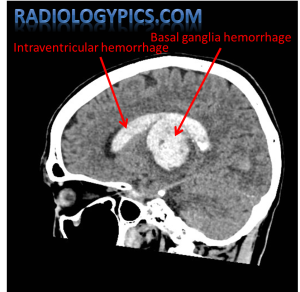 The above images show intraventricular hemorrhage (appearing as bright white material on computed tomography) demarcating the ventricular system. Normally, cerebrospinal fluid is black on CT imaging. Hemorrhage which begins within the basal ganglia (second image above) is most commonly due to hypertension in adult patients.

I am a radiology physician from California, USA.
View all posts by radiologypics »
« My Birthday, 420 and The Cannabis Culture
Thoracic Spine Burst Fracture »