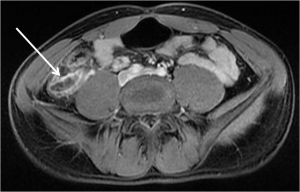 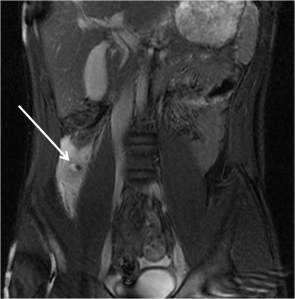 This is a case of perforated appendicitis. Appendicitis usually occurs due to obstruction of the appendix at its origin from the cecum, in this case due to an appendicolith. This causes build up of secretions and mucus within the lumen of the appendix, which then dilates. The resultant pressure on the wall of the appendix impedes blood flow the appendix, causing ischemia and ultimately perforation, as seen in the images above.

There is a wide range of symptoms of appendicitis and not all children have all symptoms. The most common symptoms include:

Treatment is best divided into whether the appendix has perforated or not, and whether there has been abscess formation or not.

Treatment for appendicitis is appendectomy. Laparoscopic surgery rather than open surgery is performed in the majority of cases.  An open appendectomy involves one larger incision in the lower right side of the abdomen. Most children are able to go home from the hospital within 24-48 hours and are able to return to school in one week.

If your child’s appendix is perforated, an open surgery is often done. The child is then treated with a course of antibiotics.

An abscess can form if perforated appendicitis goes untreated for a period of time.  Treatment includes drainage of the abscess by percutaneous catheter placement, typically performed by an interventional radiologist. A course of intravenous (IV) antibiotics is then administered. Appendectomy can be performed at a later date after the abscess has resolved.

I am a radiology physician from California, USA.
View all posts by radiologypics »
« Bicornuate Uterus with Hematometrocolpos and Hydrosalpinx
Metastatic Neuroblastoma »