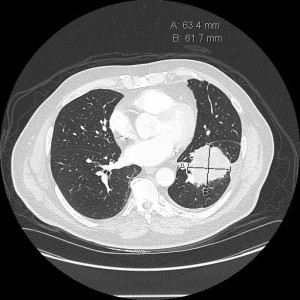 Adenocarcinoma of the lung: Axial CT scan of the chest with contrast reveals a lung mass with spiculated borders in the left lower lobe of the lung abutting the left major fissure.

The differential diagnosis for a lung mass is as follows:

1. Lung cancer – adenocarcinoma is the most common, and it commonly will have spiculated borders, a pleural tail, or thick walled cavitation. Read this post for a differential diagnosis for a cavitating lung mass.

2. Lung Metastases – most common in the lower lung zones due to hemondynamic factors, commonly multiple.

4. Pulmonary pseudotumor – loculated pleural fluid in a pulmonary fissure which is commonly lenticular in shape.

Other less common entities on the differential for a lung mass include pulmonary AVM, hematoma, bronchogenic cyst, pulmonary sequestration, and hydatid cyst. This patient’s lung mass was an adenocarcinoma, a form of bronchogenic carcinoma.

I am a radiology physician from California, USA.
View all posts by radiologypics »
« Chest Radiograph – Tubes, Lines, and Drains
Unknown Case # 2 – Chest CT »