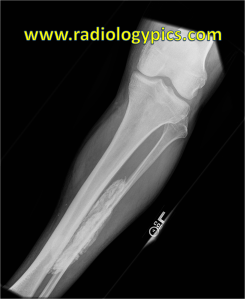 Calcific Myonecrosis: Frontal radiograph of the left tibia and fibula reveal a large sheet like calcified mass projecting over the left fibular diaphysis. See the CT below to see where this mass is located. 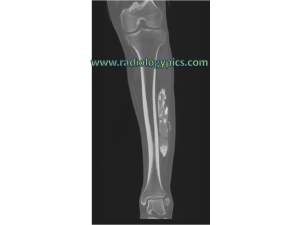 Calcific Myonecrosis: Coronal CT of the left lower leg reveals the calcified mass is in the anterior compartment of the leg, separate from the fibula.

The differential diagnosis from the plain radiograph image above would include entities such as parosteal osteosarcoma (however, not seen in 70 year old patients), myositis ossificans (also referred to as heterotopic ossification), sessile osteochondroma (though these are usually metaphyseal), and proliferative myositis.  Another entity called tumoral calcinosis is defined as massive periarticular calcification of the soft tissues.

I am a radiology physician from California, USA.
View all posts by radiologypics »
« Unknown Case #35 – Leg pain
Unknown Case #36 – Child with leg pain »