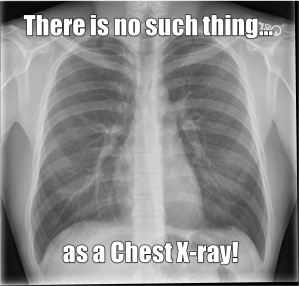 If you like physics, are particular about the lexicon you use, or are just interested in proper use of the English language, then read along. Otherwise, this doesn’t interest you.

The motivation for this article came from one of my superiors who is keenly interested in proper use of the English language in radiology reports. After all, as radiologists, our dictated report is our main product in healthcare. Its essentially the only thing that most clinicians have from their radiologist that gives them an impression of the quality of care we provide. It should be accurate, clear, and concise.

DISCLAIMER: I am not a perfect, 100% certified expert in the use of the English language. Please forgive typos, grammatical and spelling errors throughout RadiologyPics.

All you have to do is ask yourself, “What is an ‘X-ray?'” Allow me to define it for you. An X-ray is electromagnetic radiation of high energy and very short wavelength (between ultraviolet light and gamma rays, as seen in the image of the electromagnetic spectrum below) that is able to pass through many materials opaque to light. Okay, fine, maybe that definition came straight from Google, but its accurate.

An x-ray is what our radiology technologists use to make an image, which we call a radiograph, and the proper term when the x-ray is used on the thorax to make an image is  a “chest radiograph.” In the end, I suppose we as radiologists can make an exception and allow the clinicians to use the term “chest x-ray,” as nearly everybody refers to it, but really that is the slang term for a radiograph. Now that nearly all images in the U.S. are digital, I suppose we should call them “chest DICOMs” for Digital Imaging and Communications in Medicine (post-publishing edit: I’m joking here. See comment below from “Bill,” in which he appropriately points out that this is ridiculous. If the ultimate goal is to be clear, we should use a language that our clinicians prefer, as long as it isn’t completely incorrect. Perhaps the only people who should be using the term DICOM are PACS IT people and medical physicists).

The above image really should be self-explanatory. This is what I think of when a clinician says “lung fields.” The reality is that the lungs are divided up into zones, of which most models divide them into three zones from top to bottom, called the West Zones. See below.

These lung “zones” really originated with physiologic descriptions and explanations of the lung, not anatomical. The only real situation in which a radiologist should use the term “lung zone” is when they are faced with interpreting a solo frontal image of the chest, or if, on a two-view chest radiograph, there is difficulty in localizing a certain finding. However, most of the time on two view chest radiograph the radiologist is able to localize a finding to a lobe of the lung, and the term “lung zone” is not required.

To infiltrate means to permeate. When you think about the histology of lung tissue, this term is extremely ambiguous. The lung is divided into the alveolar compartment, the interstitial compartment, and the intravascular compartment.

What do you mean when you say there is an “infiltrate?” This could mean a process that is causing interstitial thickening, such as interstitial pulmonary edema. It also could be interpreted to mean that there is alveolar consolidation, such as pneumonia. The bottom line: its ambiguous. It is much better and clearer to use terms such as alveolar consolidation or interstitial thickening to help indicate what the interpreter is thinking. After all, these two processes are caused by different pathology.

In the end, the point is to be clear, because often that report is all we have to represent our quality of care.

Are there other terms that clinicians or radiologists use that are incorrect?

I am a radiology physician from California, USA.
View all posts by radiologypics »
« Pediatric Radiology is Awesome
Child Swallows Mickey Mouse – The Mickey Mouse Sign »