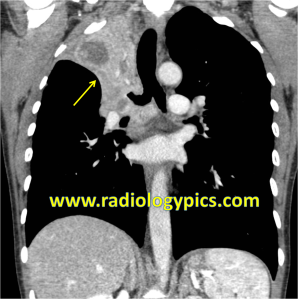 This is a nice example of right upper lobe collapse and the classic Golden S sign, which is the elevated minor fissure convex inferiorly on the proximal/medial portion and concave inferiorly on the distal or lateral portion. This sign is classically seen with post-obstructive atelectasis due to a central hilar mass, which this patient had (not shown).

See another case of atelectasis here.

Check out my e-book, Radiology Cases, on the Amazon Kindle Store.

Check out my e-book, Radiology Cases, on the Amazon Kindle Store.

I am a radiology physician from California, USA.
View all posts by radiologypics »
« Non-Cardiogenic Pulmonary Edema Mnemonic – NOT CARDIAC
Tracking Cumulative Radiation Exposure to Patients »