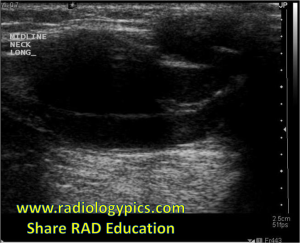 The differential diagnosis for cystic neck masses in the pediatric population is as follows:

6. Second branchial cleft cyst (which is usually lateral and not midline)

I am a radiology physician from California, USA.
View all posts by radiologypics »
« Cervical Ribs and Thoracic Outlet Syndrome
Solution to Unknown Case # 12 – Avulsion Fracture of the Anterior Superior Iliac Spine »